“Led by a vivid Flame Scarlet, the color palette for Autumn/Winter 2017/2018 is comprised of strong classics colors complemented by a few unpredictable shades for the autumn and winter seasons,” noted Pantone. “Unexpected combinations such as Royal Lilac and Otter Brown or Lemon Curry with Bluebell are eye-arresting and create an unusual color dichotomy.” 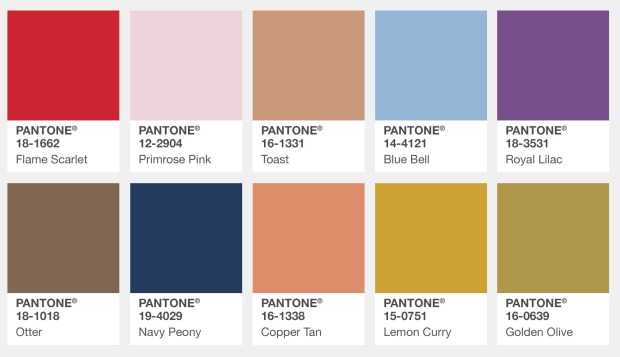 A vivid, powerful red, this strong shade leads the way in for Fall in London.

This tranquil blue reflects connection and a soothing sense of peace.

An enchanting purple, Royal Lilac provides a theatrical linkage to the other colors in the palette.

A country color that comes to the city, Otter adds an earthy grounding and a sense of rootedness.

Just as we saw in New York, the dependable and anchoring Navy Peony is a mainstay for the season. Solid and stable, the hue takes some of the load off of black as a go-to neutral.

Copper Tan, a burnished shade known for its welcoming warmth.

Exotic and spicy, Lemon Curry adds a touch of piquancy to the seasonal color story.