As trends continue to move at a faster pace for menswear, designers firmly keep their eyes on the future while maintaining a hold on the traditions of the past. For F/W 14/15, themes from the past few seasons gain momentum, especially active-influenced trends as well as those that attempt to update time- honored classics for a contemporary man. A decidedly dark mood is felt through looks that are influenced by not only Victorian dandies and classic film noir, but also gritty urban styling that combines refined sportswear with sporty layers. An undercurrent of rebellion and irreverence stays strong through looks that mimic runaway prep school kids as well as street activism and a bold approach at religious icons and holy men.

Film Noir: Inspired by film noir of the 1940s and 50s, this theme takes a dark and cinematic approach at menswear. Updated with elements of a David Lynch movie, this theme is all about classic menswear styled in a classic yet romantic way. Chalkstripe suits, updated trench coats, lustrous fur and silk, and ominous photo prints that mimic cityscapes at night.

Modern Mod: The 60s are back, with a much more refined attitude than the first time. Modern Mod is all about rounded shapes, enlarged menswear motifs, and dense fabrics. The English beat is mixed with New York sophistication. Colors remain masculine and neutral to reflect the city-scape, with pops of jewel tones to lead the way. Mixed patterns like houndstooth and Prince of Wales plaid are enlarged and exaggerated for an ironic statement on tradition.

Street Goth: One of the newest ideas to emerge for Fall / Winter 14/15 is the notion of pajama influence. Marc Jacobs first featured the theme, which was replicated on the runways of Missoni, Rochas and Max Mara. Pajama pants, tops and robes are essential pieces, set to fluid satin and silk charmeuse. Whimsical patterns like ditsy florals add to the boudoir sentiment.

Luxe Explorer: After several seasons of campground classics, the great outdoors is elevated for F/W 14 with refined styling and luxurious fabrics. Parkas remain a key item, but instead of shiny nylon, are found in wool flannel, cashmere, and suede. Fur linings and trim are prevalent, and any ruggedness is balanced with slim silhouettes and high-end finishes. Outerwear has a boxier fit than before. Animal prints return, but are used on classic shapes for a luxe feel. 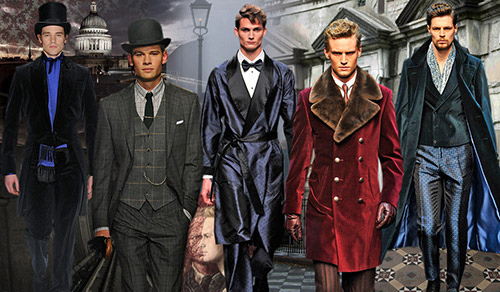